To North Wales - and Back. 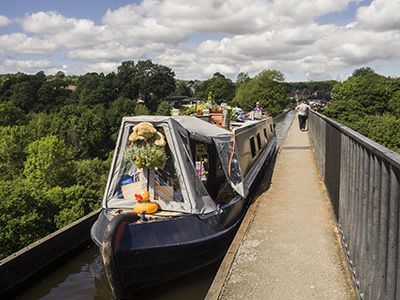 Like many of the rest of the team, we attended the Ellesmere Mission at the end of July/beginning of August. We left Birmingham and the Black Country during mid-May, as we had an appointment with the Crick Boat Show, where we were manning the stand for the Boaters’ Christian Fellowship. We covered some new ground on the way by travelling down the Worcester & Birmingham and then the North Stratford Canals.

After Crick, we had to go to Bournemouth to deal with Tim’s parents’ estate. This has been a long, drawn out process. The flat is now on the market and, after almost two years, we are praying for this chapter to draw to a close soon.

Crick is a good opportunity to meet people, and we had some good conversations. We gave out lots of literature, and our “Bags of Blessings” – paper bags filled with goodies including bookmarks, tracts, prayers and bible readings – were very popular. So much so, we had to make up more. 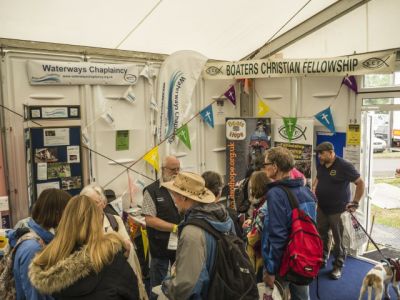 A busy stand at the Crick boatshow.

Next, we started our journey to Ellesmere. We took a slightly roundabout route, which meant we could catch up with churches and friends along the way. It also meant we had less locks to contend with! With other members of the team making a similar journey, we were blessed with being able to meet up with some of them. God also put us in the right place at the right time to pair up with Peter & Lin when they had a starter motor problem.

When we arrived in Nantwich, along with Peter & Lin we were able to bless a couple in need. Tracey’s medical knowledge came in handy. Once again, God had put us where He needed us to be!

Just past Nantwich, we turned onto the Llangollen Canal – new territory for us. We made good contact with a church in Whitchurch along the way. While we were there, we headed back to Birmingham by train as we are now involved with CRT’s Disability Forum. We stopped in Ellesmere for a couple of days to catch up with the rest of the team before going to Llangollen (over THAT aqueduct!) for a bit of a break. Whilst there, we had another good contact with a church in the town which meets on Saturday evenings. This was a blessing to us, as we were able to cruise off on the Sunday morning on our journey back to Ellesmere for the mission. 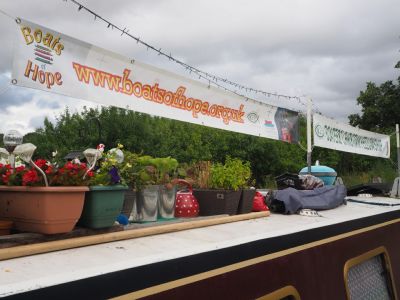 Bedecked with banners - Sola Gratia at the Ellesmere Festival.

The mission is covered elsewhere, and it was a fantastic time of witness. We got to know so many of the locals and it was wonderful to watch the change in reactions as the week went on. We enjoyed a short break on the Montgomery Canal before we started our return to Birmingham and the Black Country. We had good contact with a church in Wolverhampton and have been asked to return at some point to talk about Canal Ministries. We have an engagement with another church in Oldbury. Since our return, God has brought us into contact with a homeless person in Birmingham who is being badly let down by the system. Other team members have come across him, as have the Waterways Chaplains. It is clear that God is on his case! 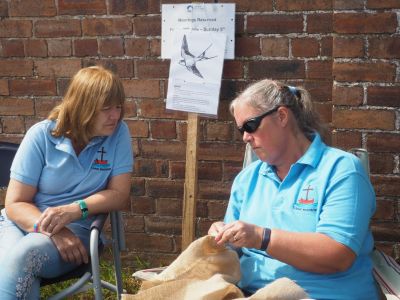 Tracey Clarke demonstrating her Rag Rugging at the Ellesmere Festival.