Back in the Black Country (again!).

A lot has happened since our last newsletter. Sadly, it was decided that Oakley needed to retire and he left us at the end of January. But, he has gone to a good home - to live with his Doggy Daddy Dixon and his owners! He is thoroughly enjoying retirement and all his health issues seem to have abated. We have seen him a couple of times since - most recently at the beginning of July. He came aboard, made himself at home, but left again happy.

Even while his retirement was being planned, we had the good news that a replacement had been found! Teddy, a lovely Golden Retriever. The matching visit went well and so we headed off to Rugby for Tracey & Teddy to train together. We enjoyed spending a few weeks in Rugby again (with thanks to Canal & River Trust for giving us permission to have an extended stay). It was great to meet with our many friends in the town, including those at Rugby Elim Church. Our journey there was slightly delayed when we got frozen in at Atherstone. We were very grateful for friends who helped with the locks on our journey. This was the first time we have done any cruising without a Guide Dog. 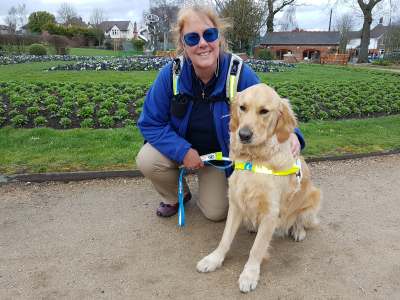 After qualification, we returned to Birmingham and the Black Country. However, before long we realized that all was not going well with Teddy. Guide Dog trainers came to see what was happening and decided to take him away for further retraining. Sadly, after a few weeks, it was concluded that he didn't want to be a Guide Dog and he was therefore withdrawn. This means that Tracey is now back on the waiting list, and this is, of course, having an effect on our cruising. However, Teddy has just gone to his new "forever home" with some friends of ours in Worthing, where we know he will be loved. Hopefully we will get to see him again in the future.

As a result, we have remained in the area. One blessing is that we have been able to attend our "home" church - Bethel Elim. Another is that we have signed up with a Health Centre (something that is far more difficult than it should be with a National Health Service!) and a dentist. Routine check-ups have given us both a clean bill of health (apart from Tracey's eyes, of course), which is encouraging, especially as Tim has recently had a significant birthday. This was celebrated with a week away in the Forest of Dean - the first weekend of which was shared with all the family. We have also been honoured to take a service at Tipton (giving the Pastors there a much needed week off), with Tim leading the worship and Tracey the talk. 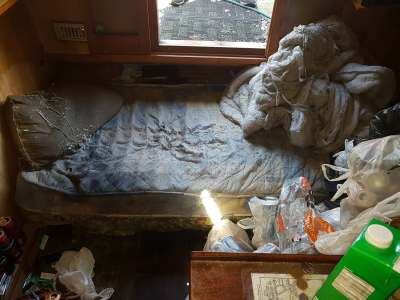 Pat's bed on the boat.

Whilst we were at Ocker Hill, we had the privilege of being able to assist one of the residents there. He has given us his full permission to share his story:

We had known Pat for a while, although not very well, as he kept himself very much to himself. We did understand he had a drink problem, though. He was unsteady on his feet and, while we were there, he fell over in his boat. This was the first time he had allowed anyone into his boat and, at last, he admitted he had a problem and needed help. The state of the boat was, quite frankly, shocking. Bags of rubbish were strewn around, and his mattress had rotted to the point of almost non-existence. It was dark and dingy, with very little daylight getting through the tiny portholes. 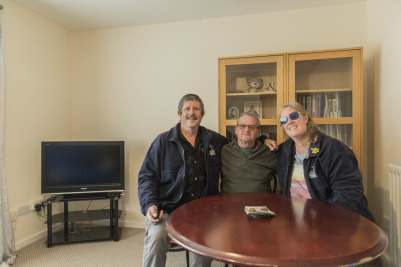 Along with some of the residents, we helped clear his boat of the rubbish and a temporary repair was made to the rotten floor which had contributed to his fall. One of the residents set up some meetings with his doctor and the local council and within two weeks he had been allocated a council flat! Through Canal Ministries, we were able to furnish the flat with some basic necessities and he moved into his new home a changed man. He is not drinking anywhere near as heavily and is looking after himself really well, making lots of new friends and keeps telling us that he can't stop smiling.

His flat is only two minutes walk from Tipton Christian Church. We have put him in contact with them and taken him along to their weekly coffee morning to introduce him. We are still in contact with him and, Praise the Lord, he is still doing well. 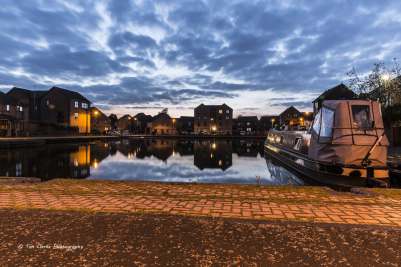 Moored up in Tividale Quays.

Since then, we have pottered around a bit between Birmingham, Oldbury and Dudley. We have also enjoyed a stay in Tividale Quays, a sadly underused but very pleasant mooring. Much to our surprise one day we were there, eleven other boats suddenly descended on us! Apparently this was a BCN Explorer Cruise, where a number of boaters get together and cruise some of the under utilized stretches of canal. "BCN" is "canal speak" for the Birmingham Canal Navigations, which covers the many miles of canals within the Birmingham and Black Country area. They stopped for lunch before leaving us in peace again.

We have also come across another couple who were suffering hardships. We were able to bless them with some food supplies and encouragement and gave them some useful contact numbers. Unfortunately we were unable to stay for long, but we have been able to refer them on to others who are in a better position to give them the support they need.

At the time of writing, we have just arrived back in Birmingham. As noted above, our plans are somewhat still in the air until we hear from Guide Dogs with some idea of timescale and where they would like us to be.

We are still waiting for Tim's parents' flat to sell. We have changed Estate Agents yet again, and there have been quite a number of viewings, but still no offers. We would value prayer that it will finally sell - and quickly now, so that we can draw a line under this part of our lives and move on.