So Christmas celebrations behind us, Christ is with us and the Wise Men from Persia bring the indication that God is reaching out to all men and I am in the fertile fields for our upcoming mission.

I cruised via Braunston tunnel, through the locks at Buckby and onto the stretch of Grand Union Canal which I am now calling home. Nominally Leighton Buzzard to Milton Keynes (thereby avoiding the muddy towpath in favour of tarmac) but, in reality, running north of Milton Keynes, because the canal runs around MK and there are settled groups of liveaboards (and a train station with moorings) around Wolverton. I have visited Northampton (down the Northampton Arm – 4.5 miles & 16 locks) and found church services available every day which provides good respite. Though trying Compline at 7.30 on a Friday evening was challenging, so peaceful and ready to sleep after… How do you keep that, when the route home passes two rock and roll pubs with live music?

Going through the Braunston tunnel on 31 October and, though I am not an encourager of Halloween, it was nice to see families moored up whilst pre-teenagers carved their pumpkin lanterns and celebrating family time with a solid investment of personal endeavour. I cleared off, my tunnel light is far too bright for a candlelit atmosphere and makes tunnels more like Sainsburys car park!

The Grand Union has been a delight so far. Wide and deep, with lovely countryside and lots of wildlife. The people are open too and I have been welcomed and challenged in the churches I have visited here. I especially like Blisworth, which I visit occasionally, because both the Anglican vicar and the Baptist minister have previously owned narrowboats. Bugbrooke deserves a mention too, as the boaters there are great and the ministers really go the extra mile. Country churches are truly valuable within the landscape, so please pray for the faithful outside of towns whose life has challenges us urbanites little realise. And for their vicars, whose flocks may be spread over six parishes.

Pray also that I will meet the right people. Six months is a good length of time to spend in one area, but it is easy to pass by boaters in need of humanity, as it takes just a few minutes to pass and people can be so easily engaged elsewhere. It’s a constant source of amazement to me how regularly God arranges for someone to be on the rear deck as I pass and just how much information and trust can be exchanged without mooring up.

I am relieved that most of the boaters I am meeting are capable and independent. Northampton is awash with homelessness, tents in churchyards, on parks and in derelict areas and food projects abound. The arm has a tent dwelling man who has sound advice and willing hands for passing boats, he tells me he only goes to town for a regular booking at a hotel for a feed and bath. He has a lovely attitude to life!

Plenty of traders too, making things on their boats or offering services, Chinese medicine the most unusual so far. And children, though it’s the wrong weather for boat children, they always have so much to offer and readily share their joy at being outside so much.

I really struggled with Milton Keynes central. If you’ve never been, it’s a bit of a show place, large railway station and piazza outside giving onto a processional way / dual carriageway with road-width pavements on either side and huge underpasses wherever a road crossing is necessary. The businesses either side are housed in tall square building blocks (though Wetherspoons looks like the Sidney Opera House in miniature). And this all really jars with the tented town existing in the underpasses. People just pass by seemingly ambivalent, it would appear we’ve institutionalised homelessness.

No such ambivalence in the churches we are partnering in the mission. Lively and open hearted, please pray that God continues and even increases His blessings on these good and faithful servants and that Canal Ministries can help and bless their endeavours with the energy and challenges we bring.

And this season’s bloopers – you know that when the canal freezes, if you move and open a channel for others you lose lots of the expensive blacking paint....Well, I hadn’t worked it through. Dawn Run’s base coat is white, nice blacking - now with white streaks on the waterline at the bow (front). 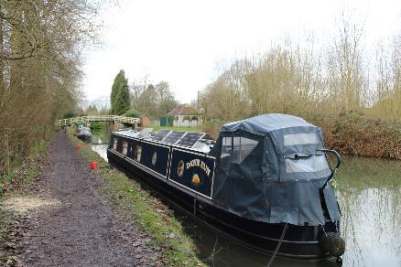 Dawn Run moored up on a stretch of the Kennet & Avon.