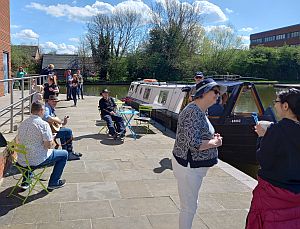 With Beacon, in Aylesbury.

We are always praying for divine appointments, so we can be in the right place, at the right time, to meet someone that God wants us to meet. This has happened several times recently.

Broughton Church in Aylesbury meets in the function room of the canal basin where we moor our boat in the winter. One Sunday morning, we were on our first duty as part of the welcome team. As two people approached the door, we asked if they were coming to the church. They had just arrived by boat, and hadn't realised that there was a church here. They couldn't come that day, as they had guests.

However, we met them later in the week, and they came the following Sunday. This was the day when there was an announcement that our church café needed a new manager. This couple, Roger and Jo, had run a café in the USA, and the timing was perfect for them. They are now the new hosts of our café, and they will tell their exciting story elsewhere, as they have also become part of Canal Ministries. Their boat is appropriately called Spirit.

As well as a café, our church has a trip boat called Beacon, and we were delighted to be able to take some ladies on a three hour trip to bless them. The contact was made through the food bank. We also took Beacon down through two locks into Aylesbury town centre, where we were giving out teas, coffees, and Bibles, and chatting to people. We had some great conversations, and we plan to do the same during the winter, perhaps offering soup. 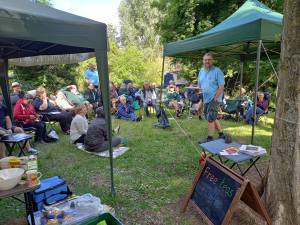 While we were preparing to leave, we were outside near our car, when a boat came down the canal. We recognised the boat, belonging to Barbara and Malcolm. Barbara came to see us, and we told her about the mission in Water Eaton, and our folk night at the Red Lion in Fenny Stratford. It turned out that they were going to leave their boat in Aylesbury for a few days, and then they would be coming up the Grand Union, passing our mission at about the right time. Barbara is an accomplished musician and singer, and she often performs at boat festivals. We invited her to join us and sing a few songs in between our sets at the pub. It all happened as planned, and Barbara managed to find a mooring near the venue. 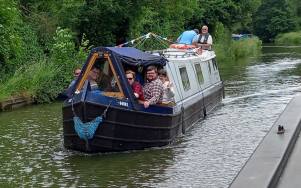 Beacon in use during the mission.

Our folk nights are a combination of folk songs, Christian songs and boating songs. We try to weave a Christian message into the evening, so even secular songs like "Can’t help but wonder where I'm bound", by Tom Paxton, can lead on to a few words about whether you are going to heaven or not. Barbara contributed some of her boating songs and played some tunes on her accordion, which were much enjoyed. John and Jan Halford joined us with fiddle and recorder for some of the livelier numbers, and we finished with "Oh when the Saints go marching in". It was a great evening, with a responsive audience, and there were some good conversations afterwards. 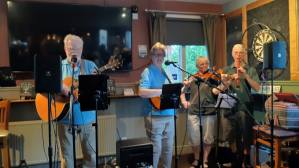 Entertaining at the Red Lion.

Others will have mentioned other aspects of the mission, which was very successful. Many seeds were sown, and we know of people who turned to Christ for the first time. Sadly, many of the team members caught Covid towards the end of the week, including ourselves. This meant that we were unable to lead the worship on the final Sunday in the Christian Centre. However, others stepped in, and took our place. That's what teamwork means, and we are so grateful for other members of our team, all of whom have different skills and gifts.

A month later, we still have occasional dry coughs, and we have not done any singing since the mission.

The leaflet we give out most is "How do locks work?", partly because it is easy to give out, as it answers questions people have about locks. It also gives a gospel message, and it features our previous boat, also called Gabriel. Our boat has the Canal Ministries logo on the side, with the message "Sharing God's Love on the Waterways". This often prompts people to ask questions. 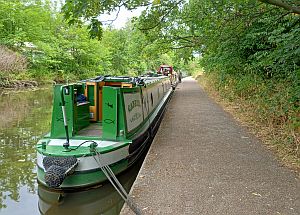 We met some lovely Christian people at Aylestone as we moored up, and went for tea with them in the King's Lock Tearooms. We each shared our testimonies, and it was a very encouraging time.

God is a provider, and many times we have found that there is a mooring place just for us when we needed one, including shady ones in hot weather. As we write this, we are in Nottingham, moored under a tree for the severe heatwave that is forecast. We continue to ask for divine appointments, and we appreciate the Lord's provision.