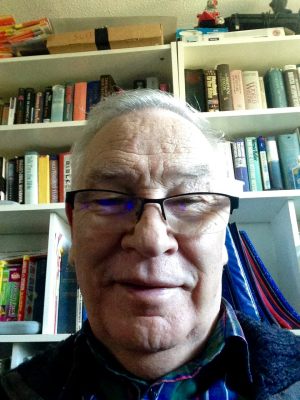 He leads me beside Still Waters.

It was back in 1972 that Geraldine and I were sitting by the Thames at Hurley. It was a sunny day and down the river chugged a narrowboat. It was the first recollection I have of ever seeing one. Geraldine’s comment stuck in our minds. “I’d love to do that” she said.

As the years progressed, the lure of the river and canals grew stronger. We purchased a small cruiser that had been sunk. All fittings had been stolen and all the woodwork was rotten. We placed it on our drive and throughout the winter I fitted it out. Come April or May, I suddenly realised that we could go all through the summer perfecting the boat and miss putting it on the water. Within the week I had cut up an old tent to make a canopy and we launched it on the Thames for a fortnight's holiday.

On leaving school, I joined the Royal Navy as an Aircraft Artificer Engineering Apprentice and served in the Fleet Air Arm for ten years. It was in 1962 during my initial training at Arbroath in Scotland that I made a personal commitment to Christ.

After leaving the Royal Navy in in 1970, I joined British Airways and started flying as a Flight Engineer on VC10s, Tristars and DC10 aircraft in 1975, eventually becoming the Assistant Flight Training Manager on the DC10 aircraft. My job as a flight engineer with British Airways became more demanding in terms of time and commitment and, with the move towards two crew aircraft, early retirement was a possibility.

This became a reality in 1999 and, on leaving British Airways, my wife and I commissioned Heron Boatbuilders to build ‘Still Waters’ for us. The name was taken from Psalm 23 “He leads me beside still waters, He restores my soul”. A dream had become a reality. We have always been active in our Christian lives and it was natural to take the opportunity to spread the Word whilst enjoying the benefits of canal life.

It was in June 2000 that we were enjoying a quiet morning coffee by the bank of the Grand Union. James and Hazel Bell saw the fish sign on our boat, stopped and joined us for lunch. They gave us a BCF membership application form and I promised faithfully to complete it when they left.

The next year we were sailing the Ashby Canal and moored alongside David and Carole Brennand. They were on their way to the Crick Boat Show - and duly press-ganged us into helping on the BCF stand! It was during the time of that boat show that I remember sitting in a boat with fellow Christians talking about this Peter Atwill who had moved on to the canals as an evangelist. "Who is this Peter Atwill?" we asked each other. “Who are Home Evangelism?” My questions were answered the following year.

It was in 2002 when we were moored at Nantwich we spotted Gospel Belle. We banged on the boat and were welcomed on-board. We spent a weekend of fellowship with Peter & Lin. Peter suggested that we consider applying to Home Evangelism. Over the next few months we prayerfully considered the possibility. We felt that, among other things, it would be good to have the backing of the organisation and it also made us accountable for our witness. We were accepted by Home Evangelism as evangelists on the waterways, and a short while later John and Barbara Froggatt also joined as well.

It was in 2005, at the end of the “Mission to the Heart" in Stone that Geraldine and I heard of Peter's phone call telling him that he was to be made redundant. This did not affect John and Barbara or us and we could have remained with Home Evangelism. I remember talking with John and Barbara having heard that Peter, Mike Greenslade and Don Martin were thinking of setting up a new ministry on the waterways. This was an opportunity to consolidate the work rather than divide between two camps. With that in mind, we all resigned from Home Evangelism and went with Peter and Lin to Canal Ministries.

During the time on the waterways, I was able to study for a BTh(Hons) degree in Biblical Studies. This gave me a greater insight and depth of knowledge into the Word of God for preaching.

We continued living on board until 2011, when we felt that it was time to leave the waterways. Having discussed our situation with Peter and Mike, we sadly resigned from the frontline work on the waterways. However, the next day I was invited to join the Trustees, which I readily accepted, and since that time I have served Canal Ministries as a trustee.