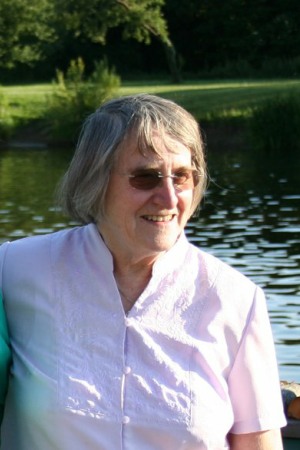 My late husband, Brian, and I moved to a bungalow on the K & A Canal in 1994 after he had to take early retirement. Shortly after, we purchased our narrowboat "Free Spirit" and met up with a small group of other Christian boaters in Nottingham. From this meeting, the Boaters Christian Fellowship was formed.

Some ten years later, a number of BCF members, who were live-aboard boaters, felt God calling them to a greater commitment to evangelism on the canals, and Canal Ministries was born. I was invited to become Secretary/Trustee for the Trust set up in January 2006 (by that time my husband had sadly passed away).

Although I no longer own a narrowboat and have moved to be near my family in Hampshire, I retain a keen interest in the work of Canal Ministries and BCF and pray for the boaters and their important ministry on the waterways.

My other interests are my family; I have three married daughters who have blessed me with seven grandchildren. I am also an active member of Testwood Baptist Church, Totton.