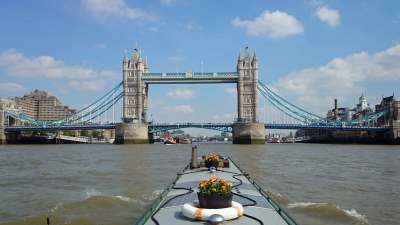 One year on the waterways is never the same as another year. 2019 has been different is several ways. Firstly, we have not had a mission to be involved with, although in some senses our lives are always a mission, hoping for divine appointments and opportunities to share the gospel with anyone who will listen. Secondly, we have been on the East Anglian waterways, which are less busy and more remote than the canals, so we have had less opportunities to chat to people. Thirdly, it is just us two on the boat, without our ship’s cat Hugo, who died in December.

We started by going down the Grand Union to join the Thames at Brentford, and then revisited the River Wey, where we have lots of friends. We had a very sociable time and sang in folk clubs in Byfleet and Putney (with a lift from friends). A rough voyage followed on the tidal Thames to Limehouse, during which our bow cover was damaged by a large wave. It has since been repaired. We took part in Cavalcade in Little Venice, a major boating event in the heart of London, and we had some good conversations with people there. 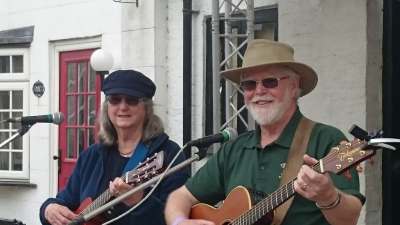 Playing a set at Rickmansworth Festival.

At the Rickmansworth Festival, we performed for forty minutes on one of the stages on the Saturday. As usual, we included some songs with a Christian message. On the Sunday we decided that we would stay by the boat and invite people on board. We were taking part in a scheme to allow accompanied youngsters on board to have a look inside a canal boat. Each boat had a large orange balloon on the roof to signify that visitors were welcome, and the kids had passports to be stamped at each venue. We hosted several youngsters and their parents, as well as some Swedish people, two Christian ladies, and a couple who used to be in CCCF (Camping and Caravanning Christian Fellowship). Everyone went away with some appropriate Christian leaflet.

We put literature out on a table with chairs alongside, and James sat there for an hour with no interaction apart from “Good Morning”. He came away and sat on the boat, and immediately people started to take the literature. He still had conversations with people once they were looking interested. Several new testaments went, as well as "How do Locks Work?" and a booklet called "Evolution – fact or fiction?" 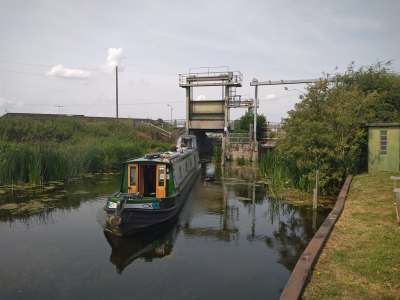 We have had one or two "God appointments". For example, we were wondering which church to visit in Peterborough. Last time we were there, eight years ago, we went to a small but lively church not far from the river. Looking online, we found that they had moved further out, too far to walk. On the Friday, we decided to moor off the River, in a lake at a place called Ferry Meadows. There are two pontoons there, with space for four boats. Another boat pulled in and moored up, and the lady on board saw the Canal Ministries symbol on the side of the boat and came to speak to us. They kindly offered to collect us by car on Sunday morning and take us to their church on the outskirts of Peterborough. It was good to meet them and share in the worship at their very lively and growing church.

We discovered that Peterborough has a high number of homeless people. We came across a homeless guy playing a very out of tune guitar. We spoke to him and said we were musicians, and did he know his guitar was out of tune? He said he was partially deaf, and his guitar tuner had got wet and no longer worked. We explored the shops and found some guitar tuners, so we bought one for him. He was delighted, and he tuned his guitar immediately. It sounded a lot better. We trust that it made a difference in some small way.

We returned to the boat and discovered a guy nearby whose tent had just been burnt down, along with his food and meagre possessions. James took him to a supermarket and bought him a sandwich and a few other things. We prefer to help people in practical ways rather than give them money, although every homeless person has a story. Some have made bad choices, and others have been the victim of circumstances.

We always look for opportunities for conversation. Hazel had her hair cut recently and gave her testimony to the hairdresser. James was being driven in a car by a staff member of a car hire company, and she asked him what brought about the decision to live on a boat, so he told her about his faith, and how God had spoken to us at a worship conference through the main speaker, who had said "It’s time to get on the boat".

What’s next for us? Firstly a few days at New Wine, a Christian event taking place on the showground in Peterborough. Then we plan to cross the Wash to Boston, with the help of a pilot. Then we will visit Lincoln, the Trent and the Chesterfield Canal, before returning south through Newark and Nottingham and via Leicester to our winter mooring in Aylesbury.

Please pray for more opportunities for us to talk about our faith. Also, for safety on the boat, particularly on the tidal crossing. Thank you for reading and taking an interest. 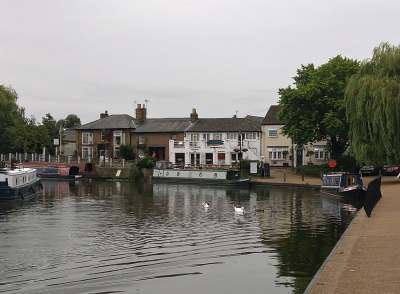 Gabriel moored at Ely on the River Great Ouse.