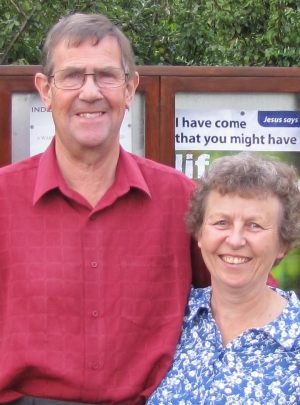 Rodney Price
and Christine
Born on 6 May 1947 in Trowbridge, Wiltshire, I have lived all my life (other than about three months) in Atworth.

Brought up to attend the local Chapel and Sunday School, I became a Christian following a midweek meeting held at the home of the Sunday School teacher. Very blessed to have Christian Headmaster at primary school where I met Gladys Aylward (a well-known evangelical Christian missionary to China), who was staying with Mr and Mrs Hunter.

Most of my career was spent as a Payroll assistant – 20 years walking 300 yards to the local engineering factory. Although made redundant several times, the Lord has been good.

In 1973/4, I was part of a committee who invited Dick Saunders to lead a "Way to Life" Crusade in Chippenham in 1975.  During this time I was convicted of the need for Baptism and was duly baptised at a local Brethren assembly. It was during a long period of choir practices for the crusade that I was eyeing up the sopranos! Christine and I married a year later and set up home in Atworth.

We were able start a Sunday School, which had lapsed at the Chapel. Christine was elected treasurer and I was formally recognised as Secretary and both continue in those posts today.  As we had no children of our own, we were able to give ourselves more fully to Christian work.

Peter Atwill came on the scene when he became Pastor of Union Chapel, Bath, a fellow FIEC Church. We shared fellowship together through FIEC local meetings. Having received Peter and Lin’s prayer letter regarding the need of a Treasurer for Canal Ministries, which was coming into existence, we promptly forgot about it until Peter knocked on the door one day and asked if we had noticed the need. Although not an accountant, I accepted Peter’s request to become Canal Ministries treasurer. That was thirteen years ago and we have learnt a lot and had good times of fellowship with Peter and the wider CM family.

Now retired (from paid employment) apart from the local Chapel,  I am keenly involved with the local Pilgrims Friend Society Home, Leonora, at Chippenham, taking a great interest in Caring for Life based in Leeds and enjoying gardening and walking.