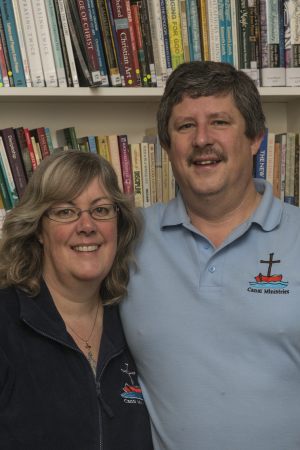 The name of our boat, Sola Gratia, is Latin. The meaning varies very slightly depending on the context, but is either ‘Only by Grace’ or ‘By Grace Alone’.

For several years we had felt God’s calling to the waterways, but we could not see how this could happen. Then a series of events changed all that and we felt God moving powerfully to put things in place. We recognised that we had done nothing to deserve anything that we had, or what God was giving to us now, and we were constantly reminded that it is only by God’s grace that we are saved. There is nothing we can do to earn His favour.

We are still learning exactly what He wants us to do, but we are humbled, blessed and very happy to be here. However, we believe that God has given us “The Good Ship”, along with a ministry to use her. We believe that at least part of this ministry is to provide a haven for people to whom we are led: People who, for whatever reason, need to rest in the tranquillity of the waterways. God called us to join Canal Ministries in February 2015, and we are honoured and privileged to be working with other couples who have a similar vision for sharing God’s love on the Inland Waterways of Britain.

Born in Bournemouth, Tim has had a varied career, starting in electrical appliances retail. He then moved to Worthing, where he met Tracey. He branched into accounts, computing, and finally public transport. The son of a church organist, he has served in various church choirs and bands. In later years, he was one of the Worship Leaders at Lancing Tabernacle and then Sompting Community Church. At Jubilee, a New Frontiers church in Worthing, he played bass guitar in one of several of the worship bands. He is now one of the worship leaders at Boaters’ Christian Fellowship events, and either plays his 12-string or bass guitar – depending what is needed.

Tracey was born and raised in Shoreham-By-Sea, West Sussex. Starting in Boots the Chemist, she began her career in pharmacy. In 1988, after a time of health issues, Tracey was told by medics that she would never be able to conceive. This was devastating news. Then in 1992 the first miracle was born: Debbi, a healthy 9lb 2oz baby girl. Debbi then gained a sister, Rosie in 1995: miracle number two! Tracey gave up her career as a Hospital Pharmacy Technician to raise the girls, returning to the profession 16 years later. During this time, she did a range of other things, including setting up and running a children’s day nursery!

In July 2011, Tracey began to suspect that something was not quite right with her eyesight. By the end of that September, after a barrage of medical tests and investigations, she was registered Severely Visually Impaired / Blind, due to Optic Nerve Atrophy. Over the course of the next few months, her vision continued to deteriorate to a tiny pinhole window in her right eye. (She had never had functional vision in her left eye, but that had never caused any problems). It soon became evident that stress and tiredness caused very significant fluctuations in the clarity of her little window.