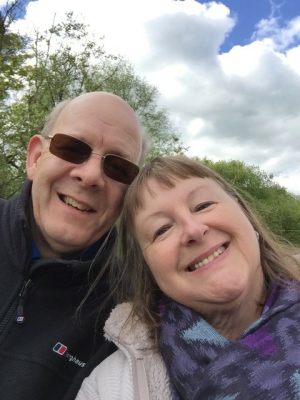 I have been a Christian since my mid-teens. The church I first attended was St John’s church in Cove (Farnborough, Hampshire), where I was later married to Sharon. Our first son and daughter were also Christened there.

We relocated from the north to the south (of Hampshire!), as my work moved to Whiteley in 1987. After a year living in Bishopstoke, it was in 1988 that we started to attend Bishopstoke Evangelical Church (where our second son was dedicated). It was there that we met Peter Atwill, who first encouraged me (two Peters - this could get confusing!) to preach and, in 1992, I took to the pulpit for the first time and spoke on 2 Timothy 1:7. I served the church in rôles that included toilet cleaner, deacon and church secretary.

After leaving Bishopstoke, we attended a New Frontiers church in Bishop's Waltham. While there, in 2002 I had the chance to attend the Leaders' conference in Brighton. This was one of those conferences that proved to be another significant event in my life and faith. Having heard Michael Ramsden speak on “Conversational Apologetics”, it seemed that the Holy Spirit was directing me to learn more, and go deeper in faith than before. As a result, it became possible for me to attend three training weekends run by the Zacharias Trust in Cheltenham.

Almost immediately following this, I was accepted to study for a Diploma in Biblical and Theological Studies at Wycliffe Hall at Oxford University, that included a stream on Christian Apologetics. I have run several introductory courses to Apologetics and believe it to be not only a useful tool in mission, but also an encouragement for fellow Christians. We now attend Kings Community Church (Southampton) and serve on the Alpha team.

Alongside my Christian walk, I like to spend time with my wife (Sharon), three grown-up children and extended family including four grandchildren. At work, it is easiest to describe me as an IT consultant. I worked on large computer systems bids and designs for Hewlett Packard for 22 years till 2009, when I was made redundant. I then ran my own consultancy firm for 4 years. Now, I work for a small media and communications company close to home. In June 2018, I will semi-retire, but take up a rôle as a part time IT trainer. However, most of this time should comprise more golf (I hope!), some study, acting as trustee for Canal Ministries - and actually getting out on our own Narrowboat.

We have owned our own narrowboat since 2012 (NB Restoration) and, as we will both have retired soon, hope to do a lot more cruising. Currently based out of Fenny Compton on the South Oxford canal, “Restoration" is a green-sided, cream roofed, 2003 58' semi-trad, with a Isuzu 38hp engine and cassette toilet (what more do you need to know!).

I became a trustee of Canal Ministries in February 2018. After much prayer, Sharon and I attended the Ministries retreat in February 2018. We met such a great bunch of people and, while enjoying their fellowship, it seemed to me they already knew my decision. Which is strange, because I hadn’t made it yet! However, on the Sunday morning, I gave in to God’s prompting, and agreed to serve with them in this area of the Lord’s work. I have to say, I really look forward to serving as part of the team of trustees and getting to know everyone better over the years to come. I am much encouraged by the folks on the boats, their gifting and love of Jesus as they seek to minister to those on the canal system.