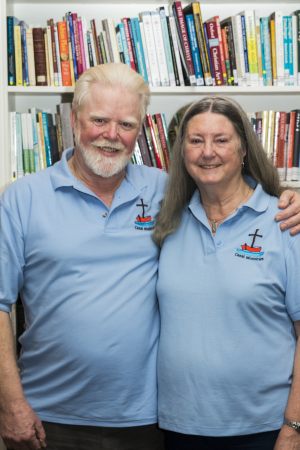 We first met in a folk club in 1970. We were married in 1975, and became Christians in 1979. We have been singing and playing guitar in folk clubs and churches ever since.

Around 1990, we realised that we needed to progress from merely learning about the Gospel to reaching out to others with the exciting good news we had discovered. We became involved in many evangelistic projects, including leading Alpha courses. Hazel became a Christian counsellor and James took part in a Training in Evangelism course. He also joined a Christian tour operator as reservations manager, and led worship on some of the holidays.

We bought our first canal boat in 1997 and feel called to bring the presence of Jesus to people we meet on the canals and rivers. We have travelled most of the inland waterways network since then and have used our musical skills at various boating events. We have been part of the evangelism team with Canal Ministries since 2010.

We are members of Broughton Church in Aylesbury, where we spend our winters, still living on the boat. However Weybridge, where we used to live, is still painted on the side.

This is now our third boat, called Gabriel. Gabriel is God’s messenger, bringing the Good News of Jesus’ birth first to His mother Mary and then to others. We feel we also need to be God’s messengers on the waterways.

It is a privilege to serve with other like-minded Christian boaters under the banner of Canal Ministries.