We probably won't be the only ones writing or saying that last year was not normal by any circumstances. Covid has had such a dramatic effect on people's lives, their activities and their hopes. We have witnessed the amazing efforts of Key Workers and their unbelievable sacrifices. Some have been touched personally; I know I was until I retired in September 2021 from the ambulance service. 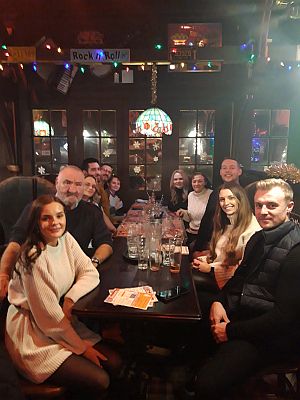 It has also driven a lot of people to re-evaluate things in their lives. Our greatest wish at Christmas was to see the family. This became reality at a quite legal evening meal and just to see our daughters, their husbands and all of our grandchildren was more important to us than anything you can wrap up in wrapping paper and tinsel.

Barbara and I have also been very blessed on our boat Ichthus. We have been allowed by Salter's Steamers, who John sometimes skippers one of their passenger trip boats, to stay on moorings they own here on the Thames at Reading. Thanks in particular to Paul Salter for allowing us here.

The last newsletter we wrote we had plans to leave our moorings here and travel around from September. We chose, however, to stay put for several reasons. Firstly, we have had our boat repainted; secondly, John has had opportunities at our own church in Thatcham and also in Stoke Row Chapel in Oxfordshire. The main reason is that we felt God telling us to stay a little longer. We are hoping to be on the move this spring, gradually making our way down the River Thames and up the Grand Union Canal to Water Eaton near Milton Keynes. There, from 12 to19 June there is an outreach to the local churches, schools and other organisations and, rather than commute by car as we did last year, we thought we would take our home with us. 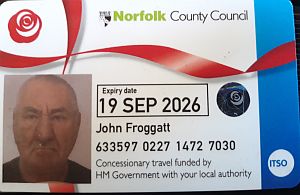 After that, we would have had to turn around to go back to work. Now I am retired we don't have to! Surely not, John. You’re not old enough. I attach a copy of my bus pass! 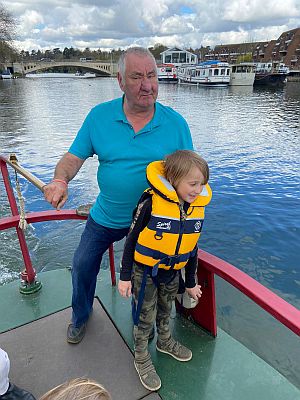 We mentioned earlier on that John has been able to do some skippering. Well, Barbara was invited to come along as crew on a couple of occasions to help with teas and coffees and some catering. She made such an impression that Salter's passed her out as a second crew so that we two make up a complete crew. The photo shows Barbara getting her stripes from another Captain, Dave Lawrence.

So that's where we are at the moment, and where we plan to be. Please pray for these plans that they are to God's will, and also good engineering and provision for our journey.

In His Name
John and Barbara Froggatt
NB Ichthus