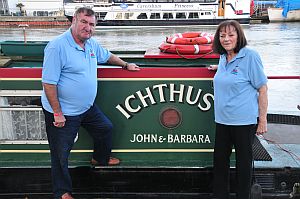 Bobbing up and down on the River Thames at Caversham in Reading. Securely tied up and chained up so were not going anywhere inadvertently, awaiting the flood waters to recede. The two storms that happened so far brought not only damage to people and property, but has changed the Thames into a really lively waterway.

Normal flow here is about 40 cubic yards a second; it's currently over 200 cubic yards a second. A lot of very quick swans and ducks going past our boat! The Thames starts near Lechlade in Gloucestershire and some 220 miles later flows out through London into the North Sea. It's an important river providing drinking water, a habitat for all kinds of wildlife (there are even salmon in the river at Oxford!) and of course as a thoroughfare for all kinds of boats. Everything from canoes (some take part in the annual Devizes to Westminster race) to the large commercial traffic and ocean liners coming into Tilbury.

Up until October 2019, John has been having a wonderful time skippering a 100 year old ex steam boat up and down carrying passengers mainly from Reading to Henley, but also at the prestigious Henley Regatta (full skippers outfit!). The company John worked for is called Salter's Steamers and they have been very kind and generous to allow us to moor on their moorings here in Reading for the foreseeable future. We are also very well cared for by a local boatyard called Caversham Boat Services, only 500 yards away where we can buy diesel, coal, water and pumpouts. They even deliver coal to us! Many thanks to Anne and Gordon Wicks for looking after us so well.

Unfortunately, the Covid-19 pandemic put an end to passenger trips for more than six people, and that obviously isn't financially viable on such large boats. Equally, preaching engagements have been limited to online but John has still been able to Zoom God's word on a few occasions. We then found John looking for work having been in a somewhat specialised job as a captain.

Many weeks of searching and “failures” including failed application as a shelf filler for L**dl , delivery driver for T***co to name a couple. Then one day a vacancy was e-mailed to me for a local private ambulance company looking for a driver. Clean driving licence and some first aid training desired. They are called EMC based on a farm 30 minutes drive from where we are moored. They are a privately owned company providing non emergency patient transport for people going to and from hospitals mainly in Oxfordshire, thus allowing the front line NHS ambulances to do what they excel at. 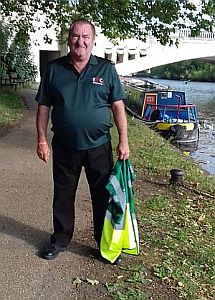 John in his ambulance uniform.

After a 30 minute video interview John was successful and has now spent 6 very happy months helping transport sometimes elderly and sometimes frightened passengers. It also reminded John that God does have a sense of humour and as plan for all of us. Who would think John would be using medical knowledge gained nearly 35 years ago? If there was any doubt about it being the right place and job for John God provided assurance. At the end of his first day, John was taking a very tall and elegant Ghanaian lady from one hospital to another. I asked how she was and she told me “she was very blessed to be getting such wonderful treatment from the NHS”. She asked me how I was and I explained I was just finishing my very first day as an ambulance man. “Then you won’t mind praying for everyone in the ambulance before we set off will you ?” OK God I hear You. 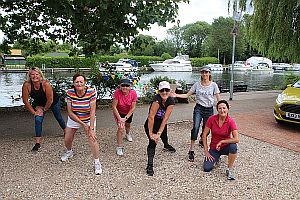 Barbara and her ladies' fitness group.

Whilst John is away “playing nee nahs”, Barbara has been busy talking to people on the towpath whilst keeping a safe distance. She has also joined a ladies' keep fit group that meet on the towpath and who have been raising money for local charities. In the picture Barbara is in the striped top.

This wretched virus has curtailed a lot of our outreaches that we used to do. It’s difficult to hand out literature and New Testaments but we are still able to talk about the good news we have. In fact in these tricky times people appear to be more receptive to the offer of prayer, and our experiences on Mission with BCF and training from colleagues in Canal Ministries have helped us greatly. Those skills or characteristics we learnt are holding us in good stead. Thank you Lord for giving us what we need to promote your Son’s Glory.

Thank you also for the support we receive through your Grace from other churches. We have recently licensed our boat for another year and we are able to go anywhere on the canal and river network. We also have the boat safety certificate due this year which is the marine equivalent of an MOT. All this is preparing us for our Big Adventure!

In September (the 29th to be exact) we are casting off and setting of to tour as much of the canal network as we can before we get too old and wrinkly to do the locks! We are uncertain as to our direction initially, whether up river towards Oxford and Birmingham, or down river towards London. We hope to have the boat painted by then and we are keeping Ichthus green. When you are doing Gods work you have to look as presentable as possible. We are collecting New Testaments to hand out on our journey and also decluttering at the same time. This will allow us to be finally free of secular work and able to focus totally on mission. We are both excited and yes a little apprehensive. God will provide not only the opportunities but also the skills and means we need.

So to conclude we give thanks to Him for His love and the gift of our salvation though His Son our Lord Jesus Christ.

In His Name
John and Barbara Froggatt
NB Ichthus