News from the Countryside. 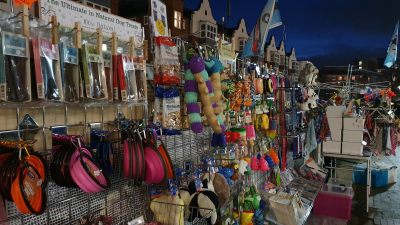 At the Birmingham Floating Christmas Market.

Christmas Greetings from the West Midlands!

At a time when our own nation seems so deeply divided, it is poignant to reflect on this Bible verse from the Christmas message. It is important that whilst there are earthly powers, there is also one who is more powerful and it is in Him alone that we should put our trust and hope.

Since our last newsletter, we have been busy getting on top of what the "Doggie Boat" entails! We have also endured a few technical difficulties. One morning we noticed that our domestic batteries weren't charging. One of the problems with a second-hand boat is that you don't necessarily get a wiring diagram. Well, we certainly didn't. Of course, the wiring had been changed since the boat's Black Prince days. However, with help from Tony, a technical expert, and a lot of delving, Tim got his head around the wiring. We discovered the alternator that charges the domestic batteries had failed. Fortunately, it was easy to connect the other alternator so that it could charge them. The main issue being it is not so powerful so would struggle to supply enough power.

Fortunately, we were back in Alvechurch at this point and learnt that there was an auto-electrics place in Redditch (a short train-ride away) that could refurbish the faulty alternator. This they did, and we got it back the same day. The bad news was that when Tim went to refit it, he left a wire off the external Voltage Regulator by mistake (this is a device which helps the alternator charge the batteries more efficiently). So, we had to manage without that. We got a replacement, which Tim fitted, but this now seems to have caused another problem, so we feel almost back at square one!

Our cruising has been restricted to much the same area as we have been for the last few months. We spent a few pleasant days in Tividale Quays again and have been over to Dudley. Apart from spending some time in Oldbury, the rest of the time has been in Birmingham. The Christmas Floating Market (not to be confused with the German Christmas Market!) was a great success - although that had its issues too. Our gazebo was fatally injured in a sudden gust of wind. We also discovered it took Tracey's Tee-Tuggies with it, although we didn't discover this loss until the following day when we realised they were missing. Thankfully, a friend managed to fish them out of the canal a few days later and, after an overnight soak and a wash cycle, they have come up as good as new.

We have found a line of healthy treats which we managed to get in time for the Christmas Market. Top marks for various delivery drivers who managed to deliver direct to the boat! These sold much better than we dared dream, and have continued to do well online too. 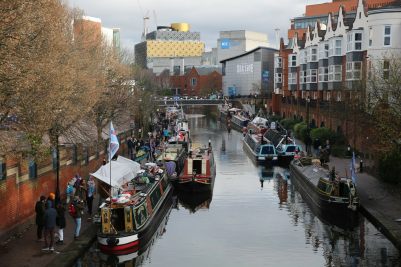 The boats making up the Floating Market either side of the Main Line.
The time at the Christmas Market was invaluable in getting to know more fellow traders. They were extremely helpful and supportive both when the gazebo went - and when it rained and we didn't have cover. We also had many good conversations with passers-by and customers. We are now spending a bit of time relaxing and sorting. We have also created an online shop (www.doggieboat.co.uk), which although fully operational, still requires a fair bit of work.

As well as trading, Tracey has become involved in meetings between the Canal & River Trust and Disabled Boaters/Canal Users. This led her to launch a Facebook Group (IWAF - Inland Waterways Accessibility Forum), which is becoming an active interface group. Recently, this was used very successfully as a platform for an online "virtual meeting" between members and CRT. As a result, Tracey is now also standing in the forthcoming CRT Council elections in the Private Boating category. There are four positions - and 34 candidates!

Tracey had a good meeting with a Guide Dog Mobility Instructor - and is now officially on the waiting list for a new dog! This could be early in the New Year, or it might be anything up to another year - or longer. It is all down to when a suitable dog comes along that they feel can cope with our lifestyle. We pray, of course, that it will be sooner rather than later.

So, we close off our final newsletter of this decade with wishing you all a Very Happy and Peaceful Christmas, and all the best for the New Year.