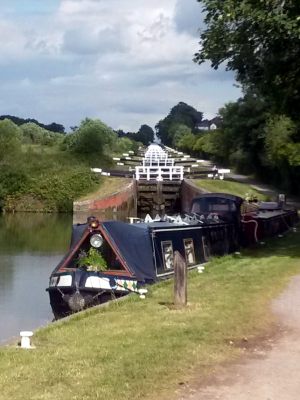 And so a year ago I was in Newbury, in the marina behind the police station, and wanting to launch out onto the Kennet and Avon Canal but not quite clear of old life responsibilities (anyone want to buy a Skoda Citigo?). Finally leaving in May, after occasional visits out ‘on the cut’, I was involved in my only head-on crash, when we both misinterpreted the situation and got caught in cross flows coming out of a lock into the river and then a near death experience when two ‘helpers’ opened the top paddles whilst I was still climbing the ladder with the centre rope in hand… A very small boat all alone in a very big lock!

And now? Still on the K&A (near Newbury!), but very happy with locks and canalside tasks and eagerly, childishly happy with the maintenance chores that accompany each move. Able to keep my home warm and relatively free of smells, under control with the centre rope (thanks John F) and moving in a straight line without actually yet being the master of the tiller.

Sounds simple, but my first boating meeting with Peter (who I see as ‘the boss’) was with me being flustered at coming across Gospel Belle and Trinity whilst on the phone. I was trying to find out where they were mooring. Panicked and slammed into reverse, which left me veering wildly and using the ‘girlie button’ for all I was worth. Peter later described it as coming round a corner to find some idiot with a bow thruster across the canal…

That day I was on the way to Devizes, not for the famed Caen Hill flight, but just for the mileage that the Canal and River Trust want to see from the ‘Continuous Cruiser’ boaters. The flight has been achieved a few times, the second time with Mistol, when I learned so much from Rob and Trish about the techniques for rapid transitions when exchanging locks in a flight. If only we had filmed it for YouTube – guaranteed viral! Actually, each time I have transited has been a delight, which is not something you normally hear from solo boaters working through so many locks. But then, not all of them have our God involved with the process.

I am very grateful for all the lessons I have had at the hands of my Canal Ministries family, without whom I would understand so little of what is actually going on. A special mention of Rob and Henry, who took me down onto the River Avon for instruction on how to safely navigate rivers. I had a great time exorcising the demons left from a long past history of sea canoeing. We spent some days in the company of a chap in a scruffy plastic boat who had been homeless for 6 years before getting afloat – our life is such a leveller. 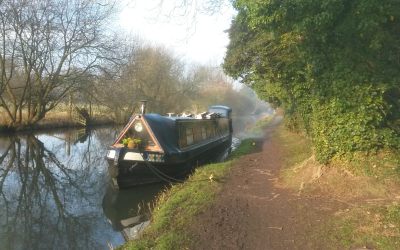 Remote mooring on the K&A.

And the progress on my new life task? Well, I have had plenty of conversations with ‘the lost’ most frequently covering the various aspects of spirituality, although the perennials for boaters (what YouTube calls ‘click bait’) feature too – wonders of nature, keeping warm, the mysteries of boat toiletry… And I’ve shared loads from the storehouse of a life spent in informal education where faith could not be shared but was still in play.

I was much more exercised by ‘the forgotten’, but God has been most active around me when I am with people who have bad memories of their experiences of the church. So I have been focussing on them. We can all feel hurt by things people say or do, but to turn your back on God because of that or, worse still - blame Him, really is cutting off your nose to spite your face. And yet, people really get tied up with not being able to forgive words, or neglect of situations by Ministers, church officials, congregations - we really need to engineer church in a way that we can talk more... Naturally this exploration with people (even where people expected others to respond to their thoughts rather than words/deeds) left me somewhat jaded about church performance and constantly changing churches along the cut didn’t help! I am especially grateful to have been safely ensconced in the congregation of St John’s Newbury, where I have found the antidote to those feelings about the apparently inevitable demise of the formal church. Here I was made welcome in a way which is respectful and inclusive, I was allowed to see the humanity and life in the congregation as we met and the church life and endeavour came into focus and they have the Rev Debbie. A powerhouse of humanity and whirlwind of pastoral energy (and her prayers and liturgical performance aren’t bad either!). It is hard to see how this combination could ever let people down in a way which would challenge faith.

The year has been BRILLIANT, so much fun, so filled with freedom and beauty and stimulation from other boaters and I won’t even start on what God’s been up to…

It’s time to move off the K&A. We have a mission in Ellesmere in August and the journey beckons. Do stop me if you see Dawn Run, time spent with people never seems to be wasted. 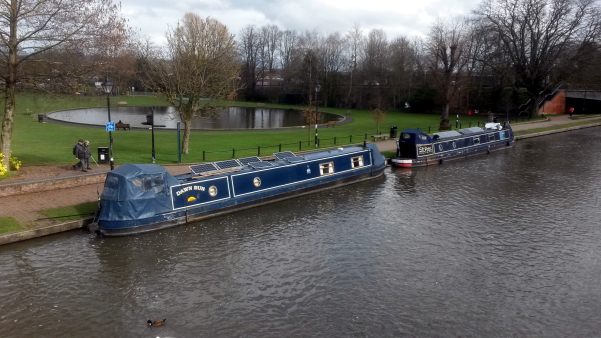